A moment that will always stick in my head from the Bucky shoot was on the very first morning. It had been a fairly frantic process putting all the crew and equipment together and although I knew all that was sorted, I hadn’t had a chance to get a sense of how the rest of the production would work. How would the cast be transported? Would there at least be a jar of coffee? 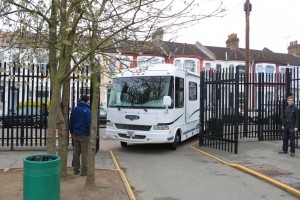 I needn’t have concerned myself about Danny’s attention to detail though as five minutes after I’d parked at the first location, a 30 foot long Winnebago “movie star” trailer turns up and starts trying to do a seventeen-point turn off the main road through the narrow gates. Once unfolded it provided a fantastic haven and makeup/costume area for the cast. The Winnebago owner and driver was of course, one of Danny’s many many industry contacts.